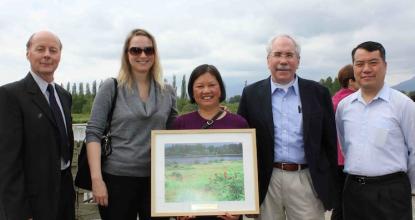 Tags:
harmony house
Harmony House.tv
HarmonyHouse.tv
cmhc
EQuilibrium Sustainable Housing Demonstration Initiative
Habitat Design + Consulting
Chris Mattock
Arthur Lo
Tracy Douglas
Net-Zero
Zero-Carbon building
Harmony House receives City of Burnaby Environmental Award
June 10, 2012
The City of Burnaby environmental awards ceremony, took place today at the Burnaby Lake Rowing Pavilion.  Marking the end to the City's environment week this annual award has been in place since 1996.  The City of Burnaby presents Environment Awards to "recognize and celebrate organizations and individuals who contribute their time and effort toward the protection and enhancement of a sustainable environment."  The nominations for award winners are recommended by "the Citizen Representatives of the Environment Committee with City Council approval".  The five Environment Award and eight Environmental Star recipients and their categories for 2012 are as follows:
Of particular interest to the writer was the project team behind the Harmony House. The team received a city of Burnaby's prestigious environmental award for planning and development of their net-zero energy building located in Burnaby.  This is not the first award that this team has won; as the home is in fact a winning entry in the Canada Mortgage and Housing Corporation’s EQuilibrium Sustainable Housing Demonstration Initiative.  The team was comprised of designer - Chris Mattock, the builder - Arthur Lo, the interior designer - Tracy Douglas, and the homeowners - Linda and Les Moncrieff.
According to the architect, Chris Mattock of Habitat Design + Consulting, the uniqueness of the Harmony House’s lies in the fact that in addition to being a highly energy efficient building, the materials that are incorporated in the construction and design of the house are very durable and environmental friendly.  Chris Mattock even claims that this may even be the first Zero-Carbon Building in British Columbia, as the house is not heated with natural gas, and even the automobile is powered by electricity generated from solar panels on the roof of the house.
This Harmony House considers seven major areas in its efforts to receive the title of being a net-zero home:
and the owner of Insightful Healthy Homes, and builder of the Harmony House, Arthur Lo, stated that the house saves energy by being very highly insulated, and the house actually "makes energy" from the solar panels on the roof.  The energy is not stored on site, but rather is sold to BC Hydro through a connection to the grid enabled by a new smart meter.  Arthur explains; "without the smart meter we would have to store energy onsite which would be problematic and cost prohibitive; so it is a key component to the energy efficiency of the home".

In winter months or in the evening the house will be able to buy energy from BC Hydro and in the Summer and Daytime hours will do the reverse, selling energy back to the grid, essentially netting out at zero on an annual basis.

The proud owners of the Harmony House Les & Linda Moncrieff said one of their most favourite aspects of their new home is the peaceful space they have created.  This they credit in part to the the triple-glazed Cascadia Windows, the high insulation values in the walls, and less exposure to the street frontage due to the layout of the buildings design. Linda says: “it is a very comfortable house and I love the open layout.”
The interior designer of the Harmony House, Tracy Douglas of Teva Design also felt that one of the best qualities of the house is its quietness: “From inside the house, you hear no noise from outside”, which makes the house a “serene” space. She also mentioned that with an open layout, the views to the outdoors, the lighting design and other design elements of the home take on a rather important role in setting the tone for the space.
So while the total cost of a net-zero home may be a bit pricier than a normal home, the combination of being able to sell energy back to the grid, dramatically reduced energy use, a vehicle powered by solar energy, and all the added comforts of a superior styled and performing building, certainly have Les and Linda's vote for being well worth it.

For more information on this project visit these links:
https://www.sustainabilitytelevision.com/video-series/harmony-house-series