Blog Post: A Closer Look at the Saskatchewan Conservation House and Four Others 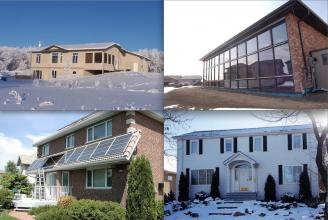 The following blog post is part two of a series documenting the history of energy-efficient houses in Saskatchewan.Read the first blog post.

Following the global energy crisis of the 1970s, the demand for energy-efficient homes increased to a level the world had never seen before. Conventional energy sources, such as oil, became so expensive that homeowners found it necessary to seek out energy conservation methods.

In Saskatchewan, where exceptionally frigid winter temperatures are the norm, it was determined that developing an energy-efficient demonstration house would effectively provide industry and citizens with tangible solutions.

Let’s take a deeper look into what insights and accomplishments were achieved through this research.

WHAT WE LEARNED FROM THE SASKATCHEWAN CONSERVATION HOUSE

Based on this research, two guides were published in 1984 to disseminate the results to Canada’s home-building industry:

WHAT HAPPENED TO THE SASKATCHEWAN CONSERVATION HOUSE?

Aside from reliability issues associated with novel technologies, part of the performance discrepancy was because the home was monitored in one phase without occupants and the second phase included a family of four. When the family was living in the house, the systems were laboured as residents were coming and going, opening doors and using a lot of hot water, among other factors.

So, in terms of energy savings, the owner’s energy bills weren’t really justifying the systems installed and eventually these alternative systems were replaced with conventional ones.

Throughout the 1990s and mid-2000s, four more energy-efficient demonstration homes based on SRC’s research and expertise were independently constructed. The four houses varied in what types of building systems were installed for efficiency purposes.

Download a quick reference guide for the energy-efficient houses in Saskatchewan mentioned here.

To determine the effectiveness of the different building systems, SRC monitored the following:

Each of the houses were:

In subsequent years, a steady demand built for building energy audit services. The impacts from SRC’s work influenced the energy-efficient building movement in Canada, including the R-2000 program that began in the 1980s (which continues to set the standard for leading-edge, energy-efficient homes) and in Germany, with the PassivHaus programwhere new buildings are required to meet high standards of energy efficiency.

There were also impressive, lasting claims made with Robert Dumont’s residence. He worked on the Saskatchewan Conservation House (while he was employed by the U of S) and later joined SRC in 1990. In 1992, Robert built his own residence using the principles that he helped establish – his residence was declared “The Best Insulated House in the World” in 2000.1 When it was monitored again in 2006, it was approximately three times as air-tight as an R-2000 home.2

The impacts from SRC’s research on energy-efficient houses resonate with today’s homebuilders who want to minimize their costs and reliance on conventional sources of energy. There are some cases where local residents have constructed their homes based on the Conservation House’s principles.

On a more commercial scale, there are homebuilders focused on helping Canadians develop highly efficient houses. In 2017, approximately 1,000 customers from SaskPower, the City of Saskatoon and the City of Swift Current produced their own renewable energy, with 80 per cent of those residents using active solar power systems.3

While energy-efficient homes may not be the status quo, they are still relevant today as Saskatchewan residents strive to reduce their energy costs and consumption.


“THIS ARTICLE ORIGINALLY APPEARED ON THE SASKATCHEWAN RESEARCH COUNCIL’S BLOG, FROM THE LAB TO THE LOADING DOCK” April 17, 2018
By Andrew Downing
Category:
Buildings