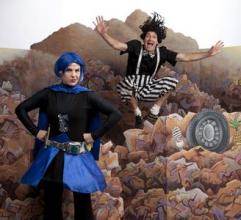 One of the most effective ways to improve the environmental state of a city is to connect with the youth of that community. Those young citizens are the most likely to incorporate sustainable practices into their lives and encourages other citizens to do the same. This is why Ian Gschwind and Vanessa LeBourdais work yearly to educate children on the importance of appreciating and cherishing our environment. DreamRider Theatre’s focus is to impact generations of society by teaching children all about recycling, conserving, and resisting consumerism.

Using 2 actors and a wide array of characters that appear throughout their different shows, DreamRider Theatre presents a variety of performances each year that feature some of the most important current environmental issues our society faces, such as climate change, over-use of power and water, excessive waste, and consumerism. Their exciting and entertaining performances manage to engage and excite children while educating them about the importance of environmental awareness. Vanessa LeBourdais, the executive producer of the productions, says that the fun aspect of the performances, such as cheers, jingles, songs, and costumes, encourage children to bring their newfound knowledge home to their families and communities.

Jingles such as “Everything we buy is a piece of the earth!” attract the children and encourage them to bring key ideas from the performance home to their parents and siblings. This ripple effect has contributed largely to the greenness of Greater Vancouver and the Lower Mainland, impacting more than half a million children over the past 14 years. DreamRider Theatre is passionate about building a generation of ecologically-responsible citizens by using the excitement of live theatre and multi-media to teach the fundamentals of environmental awareness to elementary students. Aside from live performances, DreamRider Theatre also produces video clips that can be viewed on their website, www.dreamridertheatre.com or on YouTube™ atwww.youtube.com/user/DreamRiderTheatre .

The current production, Zero Heroes, features the evil Dr. Carbon attempting to cover the world in garbage, while Esmerelda Superspy Planet Protector and her sidekick Goober encourage the audience members to help them thwart evil garbage! This production will finish its run this month, but DreamRider Theatre will have plenty more performances throughout the year and beyond! For more information, go to www.dreamridertheatre.com . To book for your own school, email the program at dreamridertheatre@shaw.ca .

Be sure to check back for a review of the Zero Heroes performance!

posted by thardes on 2011-03-21 18:41:24
After writing a quick feature article about DreamRider Theatre and their work within BC’s elementary schools, Executive Producer Vanessa invited me to watch one of the last performances of Zero Heroes so I could get a better idea of how the DreamRider performances serve to educate children on environmental sustainability. Being a theatre buff, I was happy to oblige, and I am thrilled with that decision.

From the moment that the students filed into the gymnasium for the performance, their energy was contagious. From the first scene to the finale, Sarah Holt and Ian Gschwind keep the children attentive, entertained, and excited. The key to the performance is the versatility and variety of the show. It is interactive, requiring audience members to go onstage, dance, and yell. There are several pop culture references to shows such as Scooby Doo™, The Lion King™, and Wall-E™, that keep the children involved and engaged in the performance.

There are also many visual aids, like the fold out backdrop that bore likenesses of a landfill, a bedroom, and evil Dr. Carbon’s lair. The most striking visual air is a sequence of images, held by audience volunteers, which depict the process of consumption. It shows how items we buy transition through production, from the earth’s resources to factories, to the mall, to the trash, to the landfill. As Ian and Sarah sing about consumerism and recycling, they use other pictures to show how trash and waste can be reduced.  “Zero Heroes” comes from the idea that anyone can become a Zero Hero if they learn to reduce waste in daily lives.

The singing also had an interactive element to it. “Esmeralda Superspy Planet Protector” and her sidekick “Goober” taught the children a cheer (with hand motions!) about Zero Heroes at the beginning of the show, which they were cued to sing at various points throughout the show.
We’re Zero Heroes, (flex biceps above head)
We’ve got the power, (superman pose)
We’re Zero Heroes, (flex biceps again)
Oh-kay! (make a triangle above head, then point forwards)
The passion that DreamRider Theatre has for these performances is obvious throughout the show. They had the children laughing, singing, dancing (I even saw a few kids playing the air guitar), and most importantly, learning. The lesson includes the typical Reduce, Reuse, and Recycle information, but DreamRider’s characters also explain more tedious concepts, such as the “pleasure flash and pleasure crash” of consumers when they buy new possessions.
Even someone like me, who sees herself as reasonably environmentally conscious and sustainably minded, learned something new from the performance. Esmeralda Superspy and her sidekick Goober explained that fluorescent light bulbs need to be properly recycled because they contain Mercury, which can infect the surrounding area if they are thrown into a landfill. DreamRider Theatre manages to communicate extensive amounts of information through their performance but also refrains from talking down to the children, which creates equality between the performers and the audience. Sarah and Ian’s characters seem youthful but educated, serving as positive role models for the children to emulate.
When actors Sarah and Ian took their final bows after the hour-long show, the kids applauded enthusiastically, yelling, “Encore! Encore!”. The show is an example of some very impressive work by DreamRider Theatre.
For more information about the Bright Green Future that DreamRider Theatre promotes, go towww.dreamridertheatre.com . Go to http://www.youtube.com/user/DreamRiderTheatre to view videos of the production!