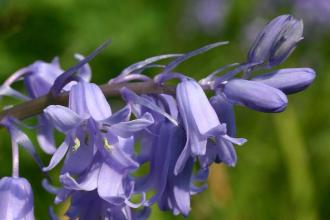 How to create new nature reserves
by  Dr Adrian Cooper

Introduction             Felixstowe's Community Nature Reserve encourages gardeners and allotment owners to allocate at least 3 square yards of their land for wildlife-friendly plants, ponds and insect lodges. As a consequence, we are developing a "community nature reserve" composed of many pieces of private land, but between which insects, birds and other wildlife can fly and develop sustainable biodiversity. In 3 – 5 year’s time we hope to have 1,666 people involved, each having allocated their 3 square yards. The result will be a community nature reserve of 5,000 square yards ie the size of a soccer pitch. This article tells you our story so far.


Getting started        The original idea behind Felixstowe’s Community Nature Reserve was born out of my frustration with politicians during the 2015 British General Election debate. None of them even mentioned the catastrophic decline in bee and other wildlife populations. Clearly, action from local grassroots was needed.

After the election result was announced, I started talking and listening with people from local government, as well as everyday people from the Felixstowe community. In fact, I spent the months until October 2015, listening and learning about what might be possible, and gathering a small team of volunteers.

Most people understood that wildlife populations in Felixstowe were falling, and they wanted to help, but they simply did not know how.

It also became clear that getting hold of a single plot of land for any kind of nature reserve project in the Felixstowe area would take too long, and would be too complicated.

I therefore decided to make participation in this initiative as simple as possible. First, I re-defined what a nature reserve could be. Instead of it being one area of land, I suggested to local people that each of them only had to allocate 3 square yards of their gardens and/or allotments for wildlife-friendly plants, ponds and insect lodges, and then aim for 1,666 people to take part. That combination would give us a total area of 5,000 square yards – the area of a football pitch, an image which everyone could imagine.


Creating our new nature reserve           By the end of October 2015, I was certain that enough local people understood what I was trying to do. I therefore started a Facebook page with my partner Dawn Holden to advise local people about wildlife-friendly plants. Here is the link: https://www.facebook.com/FelixstoweCommunityNatureReserve/

Three times each week, a new plant was advised to our rapidly growing readership. That plant list comprised: rowan, barberry, firethorn, foxgloves, thyme, sunflowers, lavender, honeysuckle, ice plant, buddleia, evening primrose and purple loosestrife. In other words, something for everyone!

For local people who don’t have access to the internet, I wrote an article for one of our local advertiser magazines. I also did an interview for our local community TV station, as well as BBC Radio Suffolk. One of the volunteers took it upon herself to print off information posters about our work and aims. Those posters ended up on just about every community notice board in Felixstowe! Over the months leading up to Christmas 2015, it was difficult to miss the name of Felixstowe’s Community Nature Reserve! By this time, we received messages from 92 local people, saying they had bought and planted at least one of the plants which we had recommended. We were thrilled with that early take-up of our ideas!

Our work continued by highlighting plants which have berries and other seasonal fruit. Here the plant list was composed of hawthorn, yew, alder buckthorn, elder, berberis, holly, rowan, spindle, dogwood and wild privet.

One of the most important features of this Community Nature Reserve is the involvement of our young members. Among those young people, we have been fortunate to have some incredible film makers. Luke Smout is an exceptionally talented media professional who made the following films about individual members of our community nature reserve:

We have also worked with an outstanding group of young film makers from the University of Suffolk in Ipswich, UK. They are Harriet Rackham (Producer), Luke Penning (Director), Amy Turlington (Sound), Vicki Walsh (Stills Photography). Not only are these young film makers brilliantly talented, but they were a pleasure to work with too. They produced a film called Nature and Community. Here is the link:

Having these young people involved with our community nature reserve brought an energy and dynamism which was essential to our success. One of the encouraging features of our nature reserve is the way people of all ages have worked together to create a sustainable community conservation project.

In the UK county of Leicestershire, the villages of Cosby and Burbage decided to copy our model to develop their own community nature reserves – all thanks to the internet, and Facebook in particular! So now, there is the Cosby Community Nature Reserve, and the Burbage Community Nature Reserve. We’ve also had several enquiries from people all over the UK, asking about the details of how we set ourselves up, and how the initiative has developed. That’s why I wanted to write this feature – to inspire and help other communities to take responsibility for their local conservation in a way where everyone can get involved.

Even window box owners are encouraged to take part! After all, they can grow herbs, crocus, snow drops and much else. So, no one is excluded.

The BBC presenter Chris Packham found out about us, again through the internet. Chris’s tweets to his 145,000 twitter followers produced a small avalanche of enquiries about our work and achievements.

We’ve also started to work alongside other conservation groups such as the British Hedgehog Preservation Society and the Suffolk Biodiversity Partnership.


Moving forward, some lessons              The most important lesson which we can offer other groups who may wish to start their own community nature reserve is to listen to as many local people as possible. Be patient. Don’t rush into the Facebook phase until your local community feels comfortable with what you plan to do.

The next lesson is to keep listening, so fresh new ideas from the community can be fed into the Facebook and other social media as often as possible. We like to use Streetlife.com because it’s a great way to get discussions going among local people who otherwise might not get involved in community engagement.

Finally, we recommend that you use as many different types of local media to spread the message about what you’re trying to achieve. To give you some idea about our media work, we have so far used Facebook, Streetlife.com, Linkedin (including multiple Linkedin posts), 3 local magazines, our community radio and TV station, BBC Radio Suffolk and Twitter.