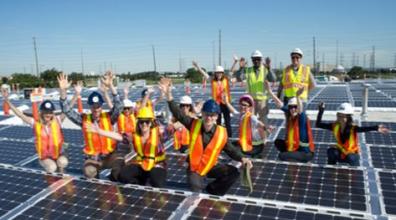 Any socially transformative movement gets to a point where it needs to be fully embraced by the people it impacts. The green power movement within Canada is at just such a point. Previously, the development of new renewable energy projects was out of reach to all but the most committed hobbyist or has been on a scale requiring government-level planning. But there are growing ways for individuals to have a voice in shaping the energy market in Canada within their own communities.

The past decade has seen an increase in the number of options available to Canadians to support renewable energy -- often associated with a premium cost to the consumer. The premium is required by renewable energy developers to make the projects economically viable when competing with traditional fossil fuel-based sources of electricity, which don't include the hidden costs of air pollution for our healthcare system or the long-term social and financial impacts of climate change in their prices.

Community renewable energy has also been around for years. In fact, the wind turbine in downtown Toronto is partially owned by TREC, a co-operative. The first wind farm in British Columbia, Bear Mountain Wind Farm, was initially started by the Peace Energy Co-operative. The concept is gaining momentum; however, large-scale participation in renewable energy co-operatives is still a relatively new concept in Canada.

Throughout the world there are different levels of participation for both the voluntary market and community-owned projects. In Europe, the role of individuals and communities in renewable energy generation varies widely by country. For example, in the United Kingdom, less than 10 per cent of renewable generation is owned by individuals or communities. Germany, long considered a green energy leader, boasts a figure as high as 65 per cent. South of the border, the U.S. Department of Energy has invested in community renewable energy programs to act as real-life case studies for future developments. These projects have ranged in size from the solar panels on the University of California at Davis' West Village to a 30 megawatt, 20 turbine project in Philips County, Colorado.

Canada is seeing a renaissance for community renewable energy projects. Renewable energy projects are increasingly being initiated and developed by co-operatives, made up of individual investors looking to promote the development of green energy in their area. One such co-operative, the Ottawa Renewable Energy Co-operative (OREC), gives residents of Ottawa the ability to jointly own and invest in renewable power generation projects in their community. Another Ontario-based co-op, SolarShare, positions the purchase of its "solar bonds" as delivering triple-bottom line returns to its members, offering economic, social and environmental benefits.

Where the benefits of renewable energy can have the most profound impact is on remote communities, not currently connected to the electricity grid. Environmental leaders like the Pembina Institute are exploring ways to use renewable energy projects to help isolated, microgrid communities reduce their dependence on polluting fossil fuels. These developments are essential for remote areas where the delivery of fuel, which in some cases requires ice roads only accessible in winter months, can be increasingly challenging in an era defined by our changing climate.

It's an exciting time to be witnessing the growth of the community renewable energy movement, but we shouldn't be too quick to see it as a panacea. Government will continue to have an important role in setting policy that will influence our future energy sources. And voluntary consumers, who vote with their pocketbooks in favour of renewables, are already driving the agenda forward. Moreover, smaller community renewable energy projects can be hampered by insufficient experience and will need to rely on networks of support, which opens the door for public participation. What the voluntary market and community renewable energy both provide is a real opportunity: a choice to participate in shaping the energy of our future.

Bullfrog Power (www.bullfrogpower.com), Canada's 100 per cent green energy provider, offers renewable energy solutions that enable homes and businesses to reduce their environmental impact, support the development of green energy projects in Canada and help create a cleaner, healthier world. As a Certified B Corporation, Bullfrog Power meets higher standards of social and environmental performance, transparency, and accountability. Thousands of Canadian homes and businesses are doing their part to address climate change and air pollution by switching to green energy with Bullfrog Power.