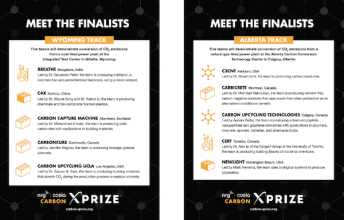 CALGARY, AB (April 9, 2018) –Today, at the Future of Energy Summit in New York City, Canada’s Oil Sands Innovation Alliance (COSIA) joined XPRIZE and NRG Energy in revealing the 10 finalists of the $20M NRG COSIA Carbon XPRIZE, who have demonstrated that their carbon conversion technologies are ready for testing at commercial scale.

The 10 teams, from five countries, will take home an equal share of a $5 million milestone prize as they advance to the next stage of the competition, proving their technologies can be economically scaled up to transform CO2 into valuable, useful products.

Five of the ten finalists will test their system’s ability to consume two tons of CO2 per day at a test centre in Calgary - the Alberta Carbon Conversion Technology Centre (ACCTC) – operated by InnoTech Alberta. The ACCTC is one of the few places in the world where carbon conversion technologies can be tested at a commercial scale, and NRG COSIA Carbon XPRIZE finalists will be the first tenants to test their solutions in the natural gas track of the competition. The other five finalist teams will conduct similar testing in the coal track of the competition at the Wyoming Integrated Test Center.

“COSIA’s members explore every avenue for improving their environmental performance, reducing emissions, and ultimately contributing to Canada’s emissions reduction goals. Our members have shared 981 technologies at a cost of $1.4 billion; between 2012 and 2016, COSIA members have reduced GHG emissions intensity by 11% at in situ operations and 9% at mining operations.” said Dan Wicklum, COSIA chief executive.

“Many of our innovations are incremental and stack up to give great results. Other innovations, like the technologies that are advancing through the NRG COSIA Carbon XPRIZE, are transformative, and have the potential to dramatically reduce GHG emissions,” Wicklum continued. “Benefits we will realize here, will have benefits far beyond the oil sands; the outcomes of the Carbon XPRIZE could have real benefits at a global scale.”

COSIA looks forward to welcoming the five finalist teams that will move into the ACCTC in this next phase. The teams are:

CERT (Toronto, Canada) – Led by Dr. Alex Ip of the Sargent Group at the University of Toronto, the team is producing building blocks of industrial chemicals.

Ultimately, the winning teams in both the natural gas and coal tracks of the competition will each be awarded a $7.5 million grand prize in the spring of 2020.

Canada’s Oil Sands Innovation Alliance (COSIA) is a unique alliance of oil sands producers focused on accelerating environmental performance in Canada’s oil sands. COSIA enables collaboration and innovation between thinkers from industry, government, academia and the wider public to improve measurement, accountability and performance in the oil sands across our environmental priority areas of greenhouse gases, land, water and tailings. COSIA members search the world for solutions to our toughest problems. And we have some of the best minds on the planet working on technologies to enable responsible and sustainable development. To date, COSIA has shared 981 distinct environmental technologies and innovations that cost over $1.4 billion to develop. Visit us at www.cosia.ca.

NRG is the leading integrated power company in the U.S., built on the strength of our diverse competitive electric generation portfolio and leading retail electricity platform. A Fortune 500 company, NRG creates value through best in class operations, reliable and efficient electric generation, and a retail platform serving residential and commercial businesses. Working with electricity customers, large and small, we implement sustainable solutions for producing and managing energy, developing smarter energy choices and delivering exceptional service as our retail electricity providers serve almost three million residential and commercial customers throughout the country. More information is available at www.nrg.com. Connect with NRG Energy on Facebook and follow us on Twitter @nrgenergy.