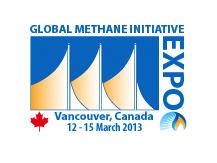 'We are here together for one simple reason and that is that methane matters. It matters in our fight against global warming, in the quality of our air, water cycle, and crop yields. And it matters to our health." - Honourable Peter Kent

Canada's Environment Minister Peter Kent kicked off the first Global Methane Initiative (“GMI”) Expo held in North America with a keynote speech that articulated the vision of many of the 42 countries represented at the third meeting of the GMI.  The initiative is a global Expo promoting methane recovery and use, and leverages practical uses of innovative technologies and knowledge transfer for the benefit economies, communities, and the planet.

The tone of the conference was one of optimism and opportunity where attendees broke off into private conversations sharing ideas to help one another in their efforts to share methane reduction solutions from their perspectives. Co-hosted by the government of Canada and the United States Environmental Protection Agency, private sector businesses, and successful project ideas and technologies were present everywhere at Methane Expo 2013.

The Expo focused participants based on their streams of expertise and included Agriculture, Coal Mines, Oil & Gas, Municipal Solid Waste, and Municipal Wastewater. There were also numerous sessions designed to help organizations and communities find creative ways to finance their projects through various incentives, and funding sources including Carbon Markets and other incentives.  There were sessions to encourage Collaboration, Technology Innovation and Adaptation, Approaches to methane detection and measurement, as well as Best Practices for various industries and applications.

One of the Canadian success stories represented at the conference was Nanaimo, BC-based Cedar Road Bioenergy Inc., one of 64 Landfill gas energy projects in Canada.  The company collects what would otherwise be methane gas naturally emitted to the atmosphere, captures and burns the gas to create electricity. Using GE Jenbacher engines Cedar Road produces an average of 450,000 kw/ month which it sells to local power authority BC Hydro through its smart meter connection to the grid.

Partially funded by the BC Bioenergy Network, Cedar Road Bioenergy is an industry-led catalyst for deploying near-term bioenergy technologies and mission-driven research in BC. The Cedar Road facility has created four long-term full time positions and has even attracted Polish Masters students Agata Skrzypczyk and Kornel Dabrowiecki working on studies in the use of biomethane for fuel and the pure economics of efficiency and productivity.

According to Cullen’s Senior Technical representative for generator sales Ethan Baily the company’s engines are relatively new to North America, as electricity costs here have historically been lower that in other parts of the world “but we are starting to see that change” said Baily.  "One of my favourite applications is landfill gas or Sewage Gas, because it’s something that is being done right now in BC. It makes perfect economic sense especially where you’re not paying for the gas, and it would otherwise just be heading out into the atmosphere.  Another interesting BC-based project mentioned by Baily was Cowpower.  “In this application they will be taking cow manure and mixing it with organic waste to create even better fuel”.

Baily went on to give another example of how their systems could be used, this time by Harvest Power.  “Harvest just uses food and yard waste for biogas generation, “they [Cowpower or Harvest Energy] could use their biogas to fuel something like a TriGen engine to produce electricity and heat on a localized basis, which would otherwise be drawn from a power utility like BC Hydro.”

One of the other added benefits that people may not often think about, or recognize is that burning methane may actually lessen the impact to the environment.  According to Environment Canada methane is 21x more destructive to the Ozone layer than CO2; leaving one to draw the conclusion that burning methane may be better for the environment as the CO2 byproduct is less destructive to the Ozone layer, can be used to create jobs, sustained economic activity, and other conservation possibilities.

The Expo showcased success stories and projects from around the world including:

Norway: Safety regulations that reduce emissions as a byproduct

One of the biggest barriers to the implementation environmental projects like methane reduction be it for mining, oil & gas, community scale bioenergy is the financial viability of the project.  A discussion on financial viability proved to be an enthusiastic topic of conversation with San Francisco based entrepreneur Adam Winter. Originally from Vancouver, and a graduate from UBC, Adam initially used his Natural Resource Management degree in the restoration of watershed projects, but soon found himself to be an entrepreneur at heart shared two of his most recent successes.

“We cut our teeth in a tough environment with no subsidies and a booming new housing market.  People thought we were crazy in 2005 focusing on existing homes, but that’s where the real opportunity is to impact the US energy budget.  We defined the target population to be 100 million single family homes and focused our software on helping homeowners to say "yes" to energy upgrades.”

Adam sold this company in 2012, and started his fourth venture with his new business partner supplying the first distributed energy efficiency offsets in the O&G industry in Canada.

"We make offsets easy," said Adam. “As far as I’m aware before Cap Op Energy, there was not a single Oil or Gas company in Canada that was able to fully capture their carbon offset value.

Adam explained, “there is not much difference in the verification of a one million tonne carbon offset project or a 100 tonne project. The cost and complexity of generating energy efficiency offsets in the O&G sector has been prohibitive except for the very large projects.”

“The problem is that the cost for smaller projects far outweighs the benefit – and what we do to solve that issue in that we aggregate similar projects for multiple customers.  In doing so we reduce the cost per customer & reducing the overhead associated with the project across multiple companies, and we have built a software platform that automates and standardizes the entire process. Before Cap Op, participating in offsets was too costly and complex as many companies were not including the offset value in their economic projections, and therefore none of these projects had a competitive IRR (Internal Rate of Return), and wouldn’t get the green light.”

“Basically there are two components in play:

1) is the energy efficiency equipment being installed in the field / Solution: saves fuel

Together these solutions make for a more competitive IRR, which leads to more energy efficiency projects getting funded”.

“Let me give you an example of how we help improve the viability and sustainability of companies by improving their bottom line. One of the companies we are working with has a project where they compared the IRR of a particular project with and without offsets. What they found was:

Adam describes his company as an “enabling technology - helping companies monetize smaller projects, making smaller projects financially viable.  What this means practically is that more projects are getting approved, operating costs are lowered, emissions are lowered, and it allows companies to reinvest the savings in additional efficiency projects.

Looking at the GMI from a global perspective UNEP Deputy Director Kaveh Zahedi described the problem of reducing global emissions as “really not that complex when we break down the actions required” and stressed the win-win spinoffs in terms of the economic, community, and environmental benefits.  Zahedi went on to say:

"Without any major technological breakthroughs we can substantially decrease methane emissions in the coming decades by reducing gas leakage from long-distance transmission pipelines, separating and treating biodegradable municipal waste, composting and collecting landfill gas. These measures, coupled with the reduction of other "short lived climate pollutants" such as black carbon or soot, have the potential to prevent millions of premature deaths each year, avoid major losses in production in some of the world’s staple crops as well as slow down the near term warming expected by 2050 by as much as half a degree and even more in vulnerable areas such as the Arctic."

Many of the conference attendees from developing countries were interested in reducing their emissions and were actively looking for the technologies required.  “We don't have the technology, we need the technology to be able to implement new initiatives" said Gamal S. AlSanoosi - Manager International Relations, Kuwait Petroleum Corporation of his company's efforts to become more efficient, profitable and environmentally responsible.

"We all live in the same world, no matter in what city "home" is. Countries must set boundaries aside and start working together for the future of mankind. Sustainability has to become the results of all policies everywhere, and the implementation of this line [of thinking] a priority for every country."