Blog Post: Round Up 2017 - My introduction to Sustainability in Mining 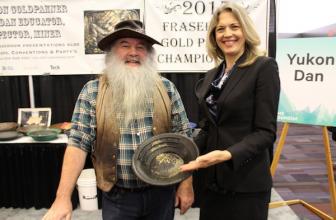 Round Up 2017 - My introduction to Sustainability in Mining

The 2017 AMEBC Mining & Minerals Roundup conference was quite fascinating, as it was my first time to the event, and my first opportunity to connecting in a meaningful way with Sustainability in the Mining Industry.

Over the course of the nearly week-long event I met many amazing people and learned so much about Canadian geography. Having grown up fairly exclusively in urban Southern Ontario and the GTA means that there are many beautifully remote parts of our country that I have yet to see. Roundup and my new awareness of the mining exploration sector introduced me to a number of new ideas for travel and work.

Well, for starters I learned how to pan for gold! That’s right, I learned to pan for gold in a one-on-one tutorial with Dan Moore better known as “Yukon Dan”.  Dan is a professional gold panner and was a Silver medal recipient at the 1998 World Gold Panning Championships

Clearly years of experience makes all the difference when you’re panning for gold, and Dan really makes it easy and fun to learn.  He started with explaining the rock types and sediment, then showed me how to hold the pan, which was quite unique in itself. The pan has ridges along the one side to allow the sand and rock to leave the pan, while the gold flakes are still left at the bottom.

The key was holding the dish at 9 & 3 hand positions, getting the angle just right, and with with every 3-4 swirls of the pan the sand and rocks debris would leave pan. I would then add more water to pan to swirl it again, at a steeper angle than the previous time and continue to do same until all that was left in the bottom of the pan was Gold!!

In fact, in less than 10 minutes of training from Dan, I had collected about $65 worth of gold flakes in my pan.

Dan educates children in schools throughout the province, and hosts the Annual Fraser River Gold Panning Championships in Yale, BC.  If you’ve ever thought that gold panning might be fun, or if you’re a pro, then you’ll want to be at this years event

And the FREE Gold Panning for all Event:

Requirements: All you bring is your boots! 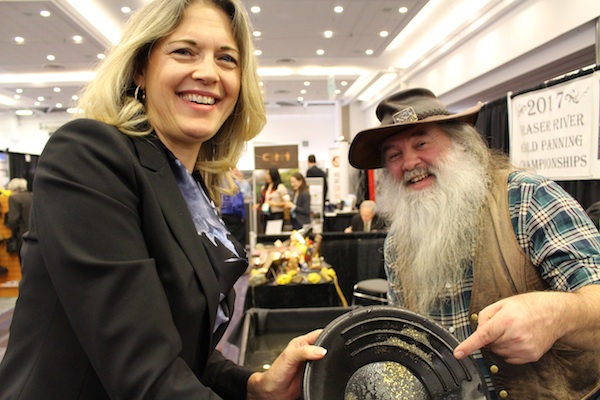 According to the AME website the Association; “represents, advocates, protects, and promote the interests of thousands of members who are engaged in mineral exploration & development, not only here in BC, however throughout the world."

The global scope of the industry was definitely clear from the number of large and small companies from all over. Due to the size of the show, and my time constraints, wasn’t able to see all that I had hoped to at the conference.

I still ask...why is it called Roundup? Maybe due to the vast areas that Mining is done across our nation...it 'rounds everybody up' into one GIGANTIC trade show??   Anyways, I didn't see any cowboys!

What I didn’t get to see, but wanted to...
Discovery Day at Roundup would have been an event I would have like to attend to learn more about the ME Industry and the importance of these minerals and metals in our everyday lives. Oh, and the Core Shack, and the Prospector's Tent, The Gathering Place, The Technical Sessions, and... wow, so much to see!!

Also, running at the same time as Roundup was the 2017 Vancouver Resource Investment Conference (VRIC). Being an avid investor myself, and interested in seeing what’s happening on the cutting edge of investment in the mining, oil & gas, and renewable energy space this will definitely be on my list of to do’s for next year. Like Roundup (Roundup speakers), VRIC (VRIC speakers) also had an amazing list of institutional investors and speakers from around the world. 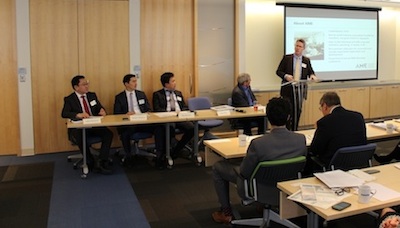 I was able to catch a couple of speakers including AME President Gavin Dirom at the Canada Eurasia Russia Business Association (CERBA) event on the margins of Roundup.

I really learned a lot from this event especially with respects to opportunities for bilateral trade and investment between Canada and the Eurasian region.

Good stories at Roundup
In support of the BC Children’s Hospital and Mining for Miracles, Sustainability Television CEO Jason Robinson and I purchased tickets for the Diamond Draw package, valued at over $16,000, includes a CANADAMARK Cushion cut 1.01 carat diamond in a gold designer setting, which is donated respectively by C3 Alliance Corp., Teck and Costen Catbalue Goldsmith + Design. 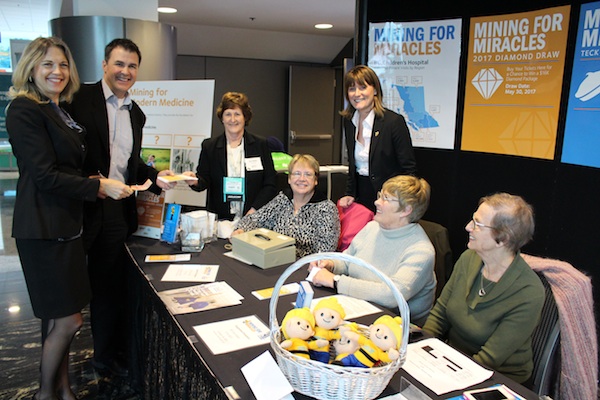 Spending time with Jason Robinson and Sustainability Television during this show and surrounding events was a terrific insight into many industries I have not really considered, or perhaps even taken for granted. I was introduced to a huge upside to revealing some of these new innovative concepts that these companies and the industry have to offer. I will certainly be back, and look forward to checking out more of the “good news” about what's on the horizon and the future.