News: Worms are the answer 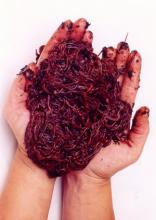 May 5 to 11 is International Compost Week, building awareness of composting, and the importance of "feeding the soil."

What better time for Cathy Nesbitt, founder of Cathy's Crawly Composters, to look back on her 12 years of promoting vermicomposting.

It's a simple, environmentally-friendly process, and her worm bins and "worm chalet" composters are ideal for classrooms, businesses and multi-family residences, where outdoor composting just isn't feasible.

Her biggest challenge has been overcoming the "ick" factor that most people have when they consider worms - and making people appreciate that earthworms are the "angels of the earth" has been perhaps her greatest accomplishment.

But after 11 years, Nesbitt admits it's time to take Cathy's Crawly Composters to the next level. She has been bringing her displays and information booths to individual classrooms, to Green shows, horticultural societies and other groups, yet interest "hasn't exploded", and vermicomposting hasn't reached the scale needed to make a dent in the amount of organic material still ending up at landfill.

"I'd love to have a space. It would be be an education centre, where people come," she says, and which could undertake projects on a larger scale, similar to the pilot projects being pioneered by the University of Michigan. "I do a lot of outreach, but I'd like to have a place where people could come to see vermicomposting" in action.

Part of the problem has been the introduction of the municipal Green Bin Program - a program that, Nesbitt says, "doesn't make sense." Residents are asked to put their organic waste into compostable garbage bags, where it rots until collected by diesel-powered trucks and, hopefully, is taken away to a composting facility.

"Hopefully, it will be processed properly, but while it's sitting, rotting in the Green bin, it's not composting," she says.

Nesbitt would love to see a Vermicomposting Centre here in Bradford - a centre that would not only be a showcase, but provide employment for Special Needs residents or Youth at risk, collecting the compostable materials, and selling the end product. "Why doesn't Bradford jump on what we're doing? Why isn't Bradford the place?" she muses.

In the meantime, she is busy with new projects. Cathy's Crawly Composters will be involved in a Girls Inc. Discovery program, that links Seniors and girls between the ages of 12 and 15 - holding a workshop on soil management and vermicomposting in June.

She will be highlighting another aspect of her business at the market: simple sprouters. "You may think my booth is confused (but) I have world hunger solved here," she told a group of students recently - creating soil, and creating nutritious food.

"It's not rocket science," says Bradford's Worm Lady. "They fit everywhere. The worms are the solution."