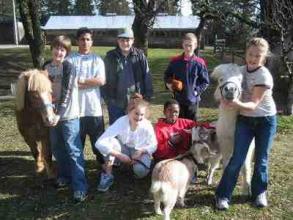 Tags:
ecology education nature spirituality
No Child Left Behind No Child Left Inside
There is no better way to reveal our potential for peace than through connection with the natural environment. In her outstanding book, Spirituality in the Non-Sectarian Classroom, Aline Wolf explores the nature of our common spirituality, apart from its formalization in any religion. She notes how this spiritual sense is intrinsic in every child, in every one of us, and that connection with the natural world is key to discovering and nurturing this sense. Immersion in the natural world is therefore a prime goal at Roots and Wings.
In 1987, in our third year of operation, we built a beautiful school, filled with light and freedom, in a rural area of Surrey. Beginning with a hundred 2 – 5 year olds, we quickly expanded to the elementary level and grew to over 180 students. Our children recycled and composted daily, floated boats down the creek they adopted and cared for, regularly cleaning out debris that was dumped and phoning the DFO when toxic spills were detected. A highlight each year was opening the bottom door of the compost bin and exclaiming and squealing at the thousands of worms that were busy creating food for the gardens. We approached each new season with wonder, marveling at the ability of a tiny seed to bear such splendor. We experimented with seeds and companion crops, vegetables and flowers, young and older children often working together. Some were passionate about the creatures in and around the garden, others were touched by the beauty and variety of the flowers and gathered samples to beautify the school; still others marveled as the first radishes appeared, later eagerly searching for carrots or peas they could pick and eat on the spot. Others threw explosions of energy into an insatiable appetite for digging!

The elementary children visited a wilderness camp during the second week of September each year, the 6 – 9 year olds for one night, the 9 – 12 year olds for one week. Here, while getting to know each other, the children studied the ecosystems of the forest, the ponds, and the grasslands. During morning learning sessions they built campfires and cooked bannock, in the evening sang around them, performed skits and roasted marshmallows. They researched and examined fungi, tree types, edible plants, and examples of many of the phyla that would later be situated on the Time Line of Life back at school. They hiked up trails and held discussions on the bluffs, played hide and seek in the woods, swung on a ten foot rope swing and paddled, swam and canoed in the small lake. They lay on the trampoline in the dark and pointed out constellations with a flashlight or played flashlight tag in the dark. “Kick the can” was great fun over the roof of the large A-frame dining hall and wide games such as “three sticks” and “Cargo” were favourite after dinner activities.

Although many children arrived having had very little connection with the natural world, they left our school not only comfortable, but feeling a connection that compels them to take care of it.

Within a few years, the rural aspect of our Newton location had disappeared as we were surrounded by megahouses and another very large traditional independent school. It was becoming clear we needed more space, especially if we were to add the adolescent program. We therefore sold this property and moved to a 10 acre farm.

While the previous sentence is a flagrant simplification of what was an unbelievable process, once on the farm I basked in the pleasure of seeing realized our dream for a more natural setting for our school.

Here we were able to hold classes out on the lawn by the barns or sitting on swings with Mt. Baker framing group discussions. Children’s heads bobbed barely visible as they ran through the long grass before haying. They gradually became able to sit quietly and enjoy just being; or they might find a peaceful location and sketch. Hay became a construction material as they built hayforts or tunnels or used it to line their “wrestling pit”.

They harvested apples and pears from the trees and blackberries from the bushes and created food products to enjoy in their classes, share with other classes, or to sell as they learned entrepreneurship.

Prime motivation for obtaining this farm property was to provide opportunities for our adolescents to experience Montessori’s recommended “Erdkinder” program to meet the needs of this developmental level. To meet their need for vigorous exercise, purposeful learning, practical entrepreneurship and emotional satisfaction, they added animals to the farm. The first year they chose goats, miniature ponies and chickens. They researched the animals anatomy, history, value to mankind, reproduction, and of course shelter and nutritional needs, then outlined how they could serve each other.

Of course the animals were not just the domain of the adolescents. The youngest children collected eggs under the guidance of slightly older students. In their classrooms they washed them and put them in egg cartons or ground empty shells into grit to feed back to the chickens. When the goats produced five little kids, the elementary children raced out at lunch time to put them on leashes and run through the fields with them. Weekly we obtained overripe produce from a local organic grocery, enough to feed all our animals – and to instill an appreciation of how much work caring for animals could be!

Adolescent students, working in their classroom, might be interrupted by a student running in, yelling that the ponies had got out again and the whole class would tear outside to chase them back to safety. It was not unusual for these older students to spend time after the regular 3:30 dismissal time, caring for their animals or just enjoying our space, phoning home to beg for “just one more hour”.

The second year we added pigs – which precipitated a huge debate and a terrific musical performed at the White Rock Little Theatre (while it was still a community theatre) exploring the question: “Should We Meat?” The 6 – 9 year olds sold their own art and food creations in the foyer of the theatre, raising enough money to send one of the five pigs to a farm where she would be loved and produce more piglets instead of joining her sibling - who became the best-tasting pork their consumers had ever tasted!

Many children arrived at Roots and Wings having had very little contact with nature, some even afraid to sit on the grass for fear of insects! Many were initially afraid of the animals. You can imagine that these fears were soon overcome to the point that the animals were the highlight of the day for many of the students. It was notable how many children, when asked if they had any idea what they would like to do when they were older, cited jobs that involved caring for animals. I would suggest that most of them would think twice before hurting even an ant or a spider!

In his book, Last Child in the Woods, Richard Louv bemoans our children’s “nature deficit disorder” as they say they “would rather be indoors because that’s where the electrical outlets are”. Many children, given a choice, would rather be indoors because they haven’t had the opportunity to know what they are missing. We bring some children from surrounding elementary schools to Roots and Wings for our out-of-school program. They are usually at first bored in the farm environment. However as they are outside most of the time, they soon learn to create their own play, awaken their atrophied imaginations and begin to appreciate all the joys of climbing trees, exploring the creek, observing animals and playing wide games. Even this limited exposure is bound to have an effect on their attitude towards earth stewardship.

Our children must have the space in nature enjoyed by the developing world's children. They need stretches without an adult looking over their shoulder and teaching them the name of something. They must have time to lie on their stomachs and watch a beetle or relax on their backs and find shapes in the clouds. They need to discover their natural connection to the ecosystems of which they are a part. Once this connection is discovered, they cannot help but nurture their natural environment and its flora and fauna. They can’t help but be stewards of our earth.