Bolivia, located in west central South America and one of the poorest countries on the planet[1], is making history by becoming the first country in the world to enact powerful legislation specifically to respect and protect the natural environment, called the Ley de Derechos de la Madre Tierra (The Law of Mother Earth).  In 2008 the nearby country of Ecuador amended its constitution[2] to include rights for Mother Nature; however Bolivia is building on Ecuador’s example by enshrining those rights into enforceable laws. 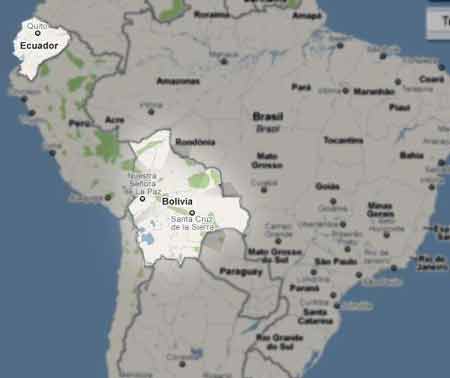 The country has long been commercially exploited by largely foreign interests at the expense of the local people and the environment, however grassroots movements for the protection of the natural environment led by small-scale farmers (Campesinos) and indigenous peoples[3] have been championed by the Bolivian government and the country will soon have the The Law of Mother Nature in place in which all nature will be granted the same rights and protections as human beings.

Under the Law of Mother Nature, humans will be considered equal to all other entities, neither above nor below all nature.  Along with the law, there will also be a new Ministry of Mother Earth, an ombudsman, and an inter-ministry advisory council[4] to support the law and give it teeth for enforcement.  Opposition to the new law has been minimal as Bolivian President Evo Morales and the governing party Movimiento Al Socialismo Government hold a majority of support in the country[5].

Tradition indigenous Andean beliefs have been integral in developing the new law, as Andeans have a spiritual outlook on the world and view Mother Earth as a deity (called Pachamama) and consider all natural resources blessings.  They also value the interconnectedness of all nature and believe in the importance of natural systems working in balance and harmony.

Close to 70% of Bolivia’s nine million population is comprised of indigenous Quechua and Aymara peoples, with the average Gross Domestic Product per Capita of only CDN $2,453.  The Law of Mother Nature will bring major economic challenges to this already impoverished nation, certainly in the short term, as Bolivia is heavily dependent on the extraction of resources like gas, oil and minerals (comprising 70% of exports) which damage the environment. One third of Bolivia’s income is derived from mining operations, and moving away from an exploitative economy will not be easy.  Additionally they will face powerful vested interest groups opposed to the obstacles the new law will present to their business ventures.

Bolivia is already unpopular with many industrialized countries, particularly the United States and the United Kingdom, over demands for the international pursuit of global emission reductions.  President Morales has been outspoken about the need for all nations to respect emissions reduction targets, and has called for an international court to oversee these efforts and punish countries that disregard agreements.  In spite of the opposition abroad, Bolivians recognize that allowing the continual destruction of the environment is ultimately not sustainable in the long term, and they are demonstrating courage, initiative and commitment within their own borders by standing up for what they believe through protection of nature and the environment with their new Law of Mother Nature.