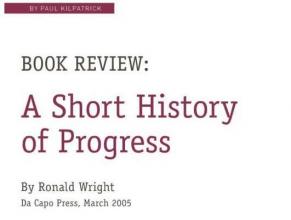 This article was originally printed in the Spring ’11 issue of Trim Tab, the International Living Future Institute’s magazine for transformational people and design.  To see this and other issues of Trim Tab, go to www.cascadiagbc.org/trimtab.
A Short History of Progress by Ronald Wright
Book Review – Paul Kilpatrick

“Like all creatures, humans have made their way in the world so far by trial and error; unlike other creatures, we have a presence so colossal that error is a luxury we can no longer afford.  The world has grown too small to forgive us any mistakes,” writes historian and author Ronald Wright in A Short History of Progress.  Published in 2004, Wright’s book examines past civilizations and identifies patterns of behavior that led to periods of rapid development and population growth followed by catastrophic collapse that left many civilizations in ruin. Wright reveals important lessons to be learned from those collapses, illustrating the dangers that progress from the over-exploitation of the environment and a lack of foresight can pose if left unchecked.

When considering the book title, A Short History of Progress, I found myself inclined to think of the word progress as a positive term with respect to the development of humankind, but of course not all progress has been for the betterment of humankind.  Wright analyzes the meaning of the term progress and makes an important distinction between moral and material progress (noting that the idea of material progress is a relatively new, post-Victorian concept).  The arms race provides an example of material versus moral progress, where advancements in weapons – culminating in the atomic bomb – represents material progress, yet isn’t likely to be considered moral progress.

The central question Wright ponders at the heart of A Short History of Progress is, “Where are we going?”  In order to assess if one is progressing, it is necessary to know the destination, and Wright wonders about where our global civilization is headed.  To address this question and determine how applicable the lessons from past societies are for society today, Wright first asks, “Where did we come from?” and “What are we?”

A Short History of Progress examines human history from Stone Age hominids dating back nearly 3 million years ago through to the dawn of civilization 5,000 years ago, and to the subsequent rise and fall of the Sumerian, Roman, Mayan, and Easter Island civilizations.  Wright also assesses the ancient societies of Egypt and China to understand the environmental advantages they had that helped them escape the ecological collapses that befell other civilizations.

Wright defines civilization as, “…a specific kind of culture:  large, complex societies based on the domestication of plants, animals, and human being.  Civilizations vary in their makeup but typically have towns, cities, governments, social classes, and specialized professions.  All civilizations are cultures, or conglomerates of cultures, but not all cultures are civilizations”

Incredibly, civilization has only been around for roughly 5,000 years, representing a miniscule 0.02 percent of human existence.  To put that in context, Wright notes that 5,000 years represents only 70 consecutive lifetimes of 70 years each.   Over 99 per cent of human existence has been in the Stone Age. The massive, rapid changes to humankind in the past few millennia are all cultural and not physical; our last physical change occurred long before civilization emerged, “To use a computer analogy, we are running twenty-first-century software on hardware last upgraded 50,000 years ago or more.  This may explain quite a lot of what we see in the news.”

Fundamental to A Short History of Progress is the concept of a progress trap, whereby an advantage gained by continuing a course of action or behavior in the short term comes at a potentially disastrous cost in the long term, and yet society is either unable or unwilling to forego the short-term benefit to guard against future disaster (for example, burning hydrocarbons at the risk of climate instability).   Wright contends that progress traps led to overpopulation and agrarian failure for several ancient civilizations.   Exceeding the carrying capacity of their environments was the key commonality between those societies, as Wright notes, “The short-lived Empire of Ur [Sumer] exhibits the same behaviour as we saw on Easter Island:  sticking to entrenched beliefs and practices, robbing the future to pay the present, spending the last reserves of natural capital on a reckless binge of excessive wealth and glory.”

Wright wonders whether civilization itself may be a progress trap.  Today we have many potential progress traps confronting us; biotechnology, genetically modified foods, nanotechnology, geoengineering, and infinite economic growth, to name a few.    Fossil fuel dependence and the associated carbon emissions may be the highest profile progress trap in the news today.  It is not a coincidence that the rise of agricultural development and the astounding human development it fueled coincides with the past 10,000 year period of climate stability.  Acting in a manner that threatens to de-stabilize the climate is folly, as Wright suggests: “Change is not in our interest.  Our only rational policy is not to risk provoking it.  Yet we face abundant evidence that civilization itself, through fossil-fuel emissions and other disturbances, is upsetting the long calm in which it grew.”

Wright’s book raises important questions about progress and where our civilization is headed.   The critical lessons in the past are simple enough.  Nature has limits.  Those civilizations that didn’t live within the carrying capacity of their natural environment eventually floundered and crashed.  With well over six billion people on the planet today, picking up and starting over again somewhere else, should the foundations of our civilization fail, is not an option as it was for those that survived collapsed societies in the past.

The concept of progress with respect to the betterment of humankind needs to be considered carefully.  Attention to environmental limits and the needs of future generations should perhaps be integral elements for anything to be labeled as progressive for humanity.  In that light, the Living Building Challenge™ green building rating system can be held up as a sterling example of something, a system in this case, that can truly be considered progressive.  It is based on sound ecological principles, long-term thinking, and awareness of humanity’s connection to the natural world, moving beyond the status quo and embracing transformational sustainability principles.    Considering the global impact of the building industry on energy and resource consumption, as well as carbon emissions, leadership in this realm is critically important.

A Short History of Progress concludes with Wright pointing out that today we have the advantage of being able to look back to understand the mistakes of past civilizations; that we still have time to find solutions to the progress traps that we face if we act quickly while still in a favorable position.  But, he warns, “Now is out last chance to get the future right.”

A quick read, A Short History of Progress provides plenty of fascinating, thought-provoking material.  Wright’s ability to distill and synthesize a vast amount of information into a succinct and compelling book is impressive. 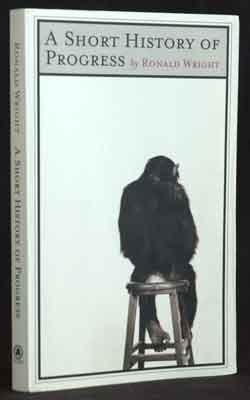