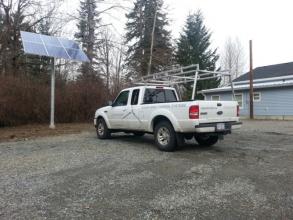 Four brand new solar photovoltaic systems, also known as solar electric, are soaking up the spring sunshine and lowering energy costs for the Comox Valley Regional District (CVRD) on Vancouver Island, BC. The installations are part of a rural areas implementation plan for the Comox Valley sustainability strategy, and were fully paid for by the UBCM’s Gas Tax Agreement, which, through the Community Works Fund, provides local governments and other eligible recipients with financial support for a variety of capital and planning projects.

“The installations provide a dual benefit," says Michael Zbarsky, CVRD manager of transit and sustainability. "They are reducing electricity consumption as well as showcasing solar electric to the public, and illustrating the benefits of these types of installations."

During a significant amount of public consultation, when the CVRD put together the Comox Valley sustainability strategy and regional growth strategy, the clear message from residents was that they wanted the local governments to show leadership in reducing greenhouse gas emissions.

According to Zbarsky, the decision to incorporate renewable energy as a way of meeting that expectation made sense from all angles. “Local governments have access to money and grants allocated for such purposes," he explains, "and often own buildings for a long time and don't have to worry about losing the asset of a renewable energy installation.”

As a result, the Oyster River fire hall, Royston water service building, Fanny Bay fire hall and a Comox Valley water service site were all chosen as the best CVRD buildings for incorporating the systems in the rural areas.

Solar electric was chosen as a matter of cost-effectiveness, ease of installation and site potential. The buildings did not use enough hot water for solar thermal to make sense and a wind turbine also turned out not to be feasible, as it would have required a height variance, a lengthy and complicated process.

While he's received much positive feedback since, several residents were concerned about the return on investment. "Most of them I manage to convince that it's a good idea,” he says. “Like Scott at Terratek says, 'what's the payback of BC Hydro?' With these systems we're pre-buying energy at a fixed cost for the next 30 years."

Zbarsky says that he recommends renewable energy installations to other municipalities looking to meet their carbon neutral goals, so long as it makes sense, and says hiring a company like Terratek Energy Solutions to provide site feasibility analysis is a valuable first step. The company also designed and installed the solar systems at all four sites in the CVRD. Zbarsky’s favourite aspect of the systems are that they're all very visible. "Because people can see them, they’re asking questions and talking. It invites conversation and discussion about sustainability topics. It's a lot nicer than energy efficiency upgrades because usually no one sees that, unless you go out and pester people about what you've done. These speak for themselves."