Blog Post: Talking to children about the environment in a way that no one else does. 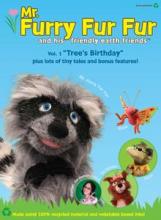 For more than 2 years now, our DVD series called “Mr. Furry Fur Fur and His Friendly Earth Friends” has been talking to children about the environment in a way that no one else does. We encourage an appreciation for the nature that surrounds children each day, the nature right in their backyard. It is about loving the Earth, our home, as well as our neighbors.

“Mr. Furry Fur Fur and His Friendly Earth Friends” has received much recognition for being an innovator in “green” children’s media. This program has been featured, and continues to be featured, on TV, print, and Web. Mr. Furry Fur Fur has also exhibited at Green Festival for the past 2 years as well as other “green” events in an effort to position the DVD series and characters as strong leaders within “green” children’s media.

We here at Friendly Earth Friends and IngaldsonSmith Productions are very proud to have our DVD put in the same catagory as March of the Penguins and Wall-e. This is aOscars of Green Childrens DVDs from Greenopia

Okay, allow us a moment of truth.  We are officially obsessed with Mr. Furry Fur Fur.  Maybe it’s because he champions the earth.  Maybe it is because you can’t help but dance to the catchy soundtrack.   Or maybe it is just because puppets are awesome.  Whatever reason you allow yourself, you MUST check out Mr. Furry Fur Fur.  This delightful DVD moves at the glacial pace best for toddlers, but you will find yourself drawn in.  So much so, that you might be unable to look away from the screen!

This movie has everything.  It has a convoluted courtroom drama where talking bees sue humans for stealing their honey.  It has a vaguely uncomfortable love story between human Renee Zelweger and bee Jerry Seinfeld.  But it does have to nod to humanity’s destruction of the environment – we abuse the bees, they stop making honey, and all the flowers disappear.  So naturally, the bees save our butts by flying in flowers from the Pasadena Tournament of Roses parade to jump start honey production…..yes, you read that correctly.  But hey, your kids will love the talking bees!

Best Eco Movie to Make Your Kids Respect Their Backyard
Over the Hedge
DreamWorks released this tale of suburban sprawl encroaching into a community of sly woodland animals.  As the trailer tells it, “their land has been developed….and their survival is at stake.”  Bring on the hilarity!  The kids get the see what we are doing to the land from the animal’s perspective.  And adults will have a laugh or two as well.  I mean, who doesn’t like a good SUV joke?

Best Eco Movie to Get Your Kids to Appreciate Mom and Dad
March of the Penguins
This award-winning documentary takes us through the lives of Emperor Penguins in Antarctica.  Your children must see this incredible journey depicting what the penguins go through to bring their babies into the world.  As narrator Morgan Freeman tells us, “In the harshest place on earth, love finds a way.”  Your kids will get an amazing view into one of the coolest (literally) environments on the planet.  And you will get to cry your eyes out at the sweet, heart-warming sentimentality.

Best Eco Movie to Get the Family Dancing
Madagascar 2: Escape to Africa
Kids learn what it means to be little people in our world.  What if animals had to learn how to be animals?  This is a great film to teach kids about how animals exist within their own natural environment.  Amidst slap-sticky fun and broad comedy jokes, of course.  Plus, you can’t help but get up and dance to the memorable soundtrack.

Best Eco Movie.  Period.
Wall*E
Disney Pixar brought us this sweet tale of humanity’s redemption by robot.  The future has earth’s people in a giant spaceship.  We are all so fat that we travel around in mobile chairs, permanently connected to phones, screens and super-sized cups.  Why?  Because humans have trashed the earth through over-population and over-consumption.  And they have left behind little robot Wall*E to clean it all up.  Ultimately, humanity will reconnect with its eco-roots.  Watch this with your family, and you will reconnect with them!