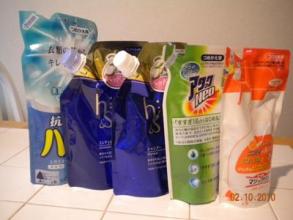 Have you ever thought about how many plastic bottles you go through in a week? A month? A year? Not only do we use plastic bottles for drinks, but we use them for shampoos, conditioners, detergents, disinfectants, and so on. Although many of us recycle these plastic bottles, there is a way to take an extra step and reduce the consumption itself!

In Japan, refill packs called, "tsumekae-you", are used to avoid buying new bottles every time. These refill packs are simple pouches that contain liquid products and are sold alongside the bottles in supermarkets, convenience stores, and pharmacies. Not only does this change our use of plastic bottles, but the main reason for its popularity is that these refill packs are cheap!

For example, an ordinary bottle of shampoo costs about 600 yen (roughly 7 Canadian dollars) while a refill pack of the same product costs 400 yen (roughly 5 Canadian dollars). If you were given a choice, would you pay extra to buy a new bottle every time? In these economic times, many people, especially poor students like myself, will do anything to save that extra dollar and this is a brilliant way to do so.

Today, the idea of refill packs is so popular in Japan that some pouches have caps on them to replace bottles completely. In addition, many 100 yen stores, which are similar to the dollar stores found in North America, now carry DIY caps that we can manually screw on for better storage. Will this be the end of plastic bottles? Certainly not. However, Japan has been successful in reducing excess production and changing people's lifestyles. So why don't we have this in Canada? It is evident that many of the brands that are cooperating with this idea are popular here in North America as well.

Perhaps we can decrease our consumption of plastic bottles by demanding refillable packaging through our purchasing decisions...